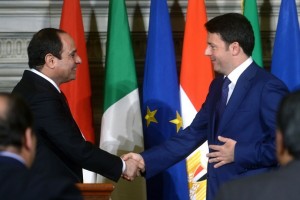 Saudi Arabia, Kuwait, the United Arab Emirates and Oman on Friday pledged a combined $12.5 billion in aid to stimulate the Egyptian economy during an investment summit held in the Red Sea resort of Sharm el-Sheikh.

Egypt is to build a new capital city, to relieve chronic congestion inCairo and spur national development. The new capital will be built on an area of 700 square kilometres (490 of which will be reserved for urban development), east of Cairo, at a total cost of $45 billion.

The city will be located between Cairo and the planned Suez Canal hub north west of the Gulf of Suez, flanked on both sides by two ofEgypt’s major highways, the Suez Road and the Ain Sokhna Road.

The city will include 1.1 million residential units to house five million inhabitants, as well as an administrative district on 1,000 acres of land, with a presidential palace, ministries, government bodies, and embassies, as well as a financial district. 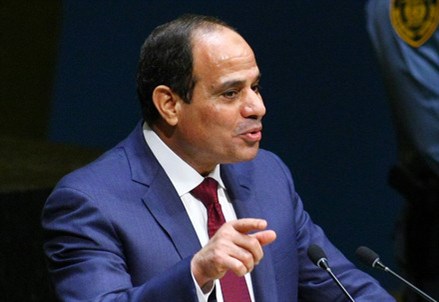 During his speech he repeated this paragraph for its importance: We are presenting a model for an Arab and Islamic civilization with its true tolerant values, a country that renounces violence, terrorism and extremism. A state that promotes stability and regional security, respects its neighbors, defends and is not aggressive, accept and respect the others, believes that disagreeing is a way for mutual friendship and human civilization enrichment.

This speech is important for two reasons: Renzi had been the highest West countries leader present in the summit and for its content. The Italian prime minister, Matteo Renzi, said that Egypt’s economy is of vital importance to Italy and pledged to aid Egypt in it’s fight against Islamist terrorists.

“Your war is our war, and your stability is our stability,” Renzi said. “The issue is not about Egypt or the region only, but also about Italyand the rest of the world.” The Italian PM also invited President Abdel-Fattah Al-Sisi to attend an energy conference in Milan in May, where he hopes to have Al-Sisi speak on the threat posed by Islamist militants.

Renzi also said that his country hopes to further expand its already prominent business presence in the region and will present some of their ideas publicly tomorrow.

Holding Company for Tourism to present 4 projects in EEDC 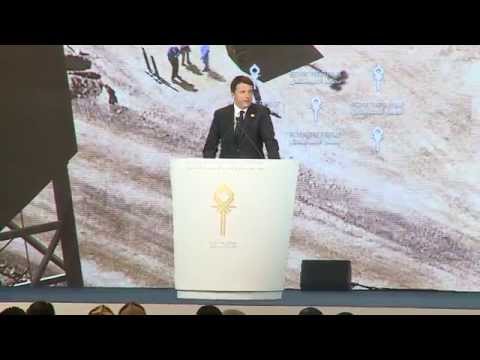 The first project encompasses the establishment of a resort in Magaweesh touristic village located in the Red Sea coastal city ofHurghada. The other projects to be proposed during the EEDC include the development of the Cosmopolitan Hotel in downtown Cairo with a total cost estimated at 85 million EGP along with a real estate project in Alexandria with a total cost of 58 million EGP. The Shepheard hotel in downtown Cairo was also going to be included among the projects.

The fourth project features the establishment of a sound and light show in the Red Sea city of Hurghada with a total cost estimated at 123 million EGP.

Europe mobilizes €272M to Egypt at the EEDC: Press Release

The European Investment Bank which is the Bank of the European Union signed a loan of €120 million with the National Bank of Egypt (NBE) for supporting private sector companies in Egypt.

According to one of the four memoranda, a combined power plant will be established in Beni Sueif (Upper Egypt) with capacity of 11.004 megawatts. The second memorandum includes establishing five other combined power plants in Noubarya of Beheira governorate (Delta), in Sedi Kirir in Alexandria, in Southern Cairo, in Qena (Upper Egypt), and in Kafr el-Dawwar with total of 6,600 megawatts. According to the third memorandum, a large factory will be established to produce manufacturing tools for the wind plants, the statement added.

Under the fourth memorandum, another factory will be established to power transformer stations with different voltages.

Egypt signs oil, gas deals worth $21B with at economic conference

Egypt signed two oil and gas deals worth a total of $17 billion Saturday on the sidelines of the economic conference, and another $4 billion deal is scheduled to be signed Sunday.

Minister of Petroleum Sherif Ismail signed a $12 billion deal with British Petroleum Egypt in the presence of UK Ambassador to Egypt John Casson, Saturday on the sideline of the Egypt Economic Development Conference (EEDC). 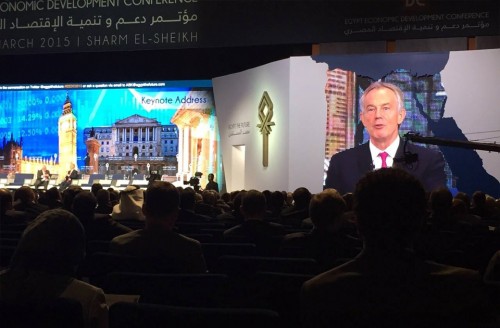 Saturday also witnessed the signing of an agreement between Italy’s oil major ENI, and Egypt to inject investments worth $5 billion in developing gas fields in concessions located in the Mediterranean, theWestern Desert, the Nile Delta and Sinai to produce 900 million cubic feet.

Another deal worth $4 billion between Egypt’s Petroleum Ministry and BG Egypt, a subsidiary of British Gas Group, will be signed on Sunday, the third day of the EEDC.

Further, Egypt’s Ministry of International Cooperation will sign an agreement with the Islamic Bank of Development to provide $200 million for financing a petrol production unit in Upper Egypt’s Asyutgovernorate to meet fuel demand in Upper Egypt.

Transport Minister Hani Dahy met with representative from the China Harbor Engineering Company (CHEC) Saturday to discuss initial technical and economic studies carried out to implement a high-speed train project to link between Alexandria and Aswan.

“The project would cost $10 billion and the train’s speed would reach350 kilometers / hour which means it will cover the distance betweenEgypt’s Mediterranean city of Alexandria and Aswan in 3-4 hours.  “During the conference, the ministry aims to attract investments worth $4 billion through 9 projects in transportation and ports sectors,” Dahy said.

Germany’s economy minister on Saturday invited the Egyptian president for a state visit to Germany, the newspaper Handelsblatt reported in its online edition.

Egypt signs 18 agreements worth $86B at economic conference

Egypt’s government signed around 18 agreements with an estimated total cost of $85.8 billion Saturday on the sidelines of the three-day Egypt Economic Development Conference (EEDC) “Egypt the Future,” in Sharm el-Sheikh of South Sinai.

UAE Majid Al Futtaim increases investments in Egypt to $23B

The Egyptian Minister of Investments Ashraf Salman signed Saturday an agreement with the UAE’s Majid Al Futtaim, a leading retail and leisure pioneer across the Middle East and North Africa (MENA) to increase its investments by $5 billion to reach up around $23 billion over the coming five years.

The Suez Canal Development Project will constitute 30 to 35 percent of Egypt’s economy once completed, says the presenter at the Suez panel. 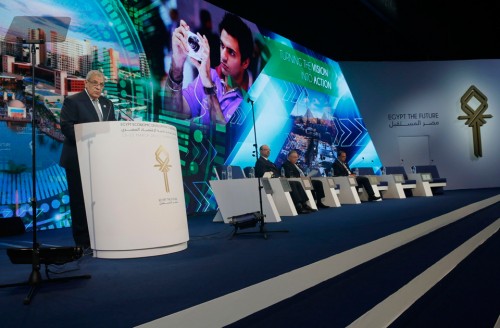 World Bank has allocated $5 billion for its Egypt programme over the next four years, says Hafez Ghanem, the Bank’s MENA Vice President. It will therefore increase its annual portfolio more than twofold to $1.2 billion.

The European Investment Bank has two billion euros of investments in the pipeline for Egypt, says VP Ambroise Fayolle. “Infrastructure is critical, particularly energy,” says Jin-Yong Cai, Senior Vice President and CEO of the World Bank Group’sInternational Finance Corporation. It’s not possible to build it all with foreign capital, so Egypt must mobilise domestic capital to mitigate the risks of foreign financing, says Cai.

Egypt needs a lot of capital very quickly and a private sector that is ready to invest, not just a reformist government and aid from foreign governments, says Naqvi.

Egypt has signed four agreements with the Islamic Development Bank (IDB) worth a total of $800 million to finance four priority development projects for Egypt, according to a government press statement.

A framework agreement worth around $3 billion was signed between the International Islamic Trade Finance Corporation (an affiliate of the IDB Group) and the Egyptian General Petroleum Corporation (EGPC) to import petroleum products for the Egyptian market over the next three years.

The UAE’s Al Swidan Group signed two deals worth a total of $6 billion with Egypt to invest in the grain logistic hub in Damietta in Egypt’s Delta as well as in the Suez Canal Development Project.

Egypt and Cyprus signed a memorandum of information exchange over the possible establishment of a natural gas pipeline extending from Cyprus’s Aphrodite field to Egypt, Egypt’s Minister of Petroleum told Reuters. The study will be concluded by mid-2015.

President El-Sisi has just concluded a meeting with the French minister of finance, according to Ahram Online’s reporter on the field. There’ll be a press conference shortly.

Former British prime minister Tony Blair has been speaking in the main room at the conference. He praised a number of recent decisions taken by the Egyptian government saying they have had a positive short term impact. He cited the new investment law, reforms on fuel subsidies, and the promotion of the private sector as examples of positive reforms.

Kerry: Decision on unfreezing US aid to Egypt to be made ‘very soon’