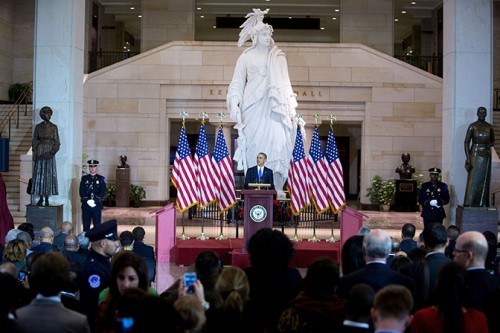 In the U.S. Capitol, President Obama commemorated the anniversary of the 13th Amendment, reflecting on the fight for progress 150 years after the abolition of slavery. “President Lincoln understood that if we were ever to fully realize that founding promise, it meant not just signing an Emancipation Proclamation, not just winning a war. It meant making the most powerful collective statement we can in our democracy — etching our values into our Constitution.”

“We would do a disservice to those warriors of justice — Tubman and Douglass, and Lincoln and King — were we to deny that the scars of our nation’s original sin are still with us today. We condemn ourselves to shackles once more if we fail to answer those who wonder if they’re truly equals in their communities, or in their justice systems, or in a job interview. We betray the efforts of the past if we fail to push back against bigotry in all its forms.”

“For however slow, however incomplete, however harshly, loudly, rudely challenged at each point along our journey, in America, we can create the change that we seek. All it requires is that our generation be willing to do what those who came before us have done: to rise above the cynicism and rise above the fear, to hold fast to our values, to see ourselves in each other, to cherish dignity and opportunity not just for our own children but for somebody else’s child. To remember that our freedom is bound up with the freedom of others — regardless of what they look like or where they come from or what their last name is or what faith they practice…”

“That is our choice. Today we affirm hope.”