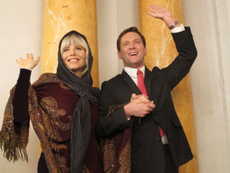 “My wife in a chador” by Claudio Angelini

Claudio Angelini is a noted Italian TV news reporter and author of 15 books of poetry, novels and essays. Among his many news assignments, he covered the death of the Italian statesman Aldo Moro, who was kidnapped and killed by the Red Brigades in 1978. Angelini was the Director of the RAI office of the Quirinale and the anchorman of Italy’s National newscast Tg1 for over twenty years. He has directed countless RAI shows and offices, such as the Radio newscasts (Gr1-Gr2 and Gr3) and RAI’s headquarters in the United States. On September 11, 2001 he was the first Italian journalist to report the news of the attack on the Twin Towers. He was also Director of the Italian Cultural Institute of New York, where he has been living for 15 years and where he currently serves as President of the Dante Alighieri Society and columnist for an Italian daily, Il Messaggero.Last season, Angelini made his NY playwriting debut with “Obama in Naples,” a comedy with songs that speculated whether the “good magic” of our President could rescue Southern Italy from its never-ending woes. It was staged at the Abingdon Theather and at the Italian Embassy in Washington, where it opened the year of the Italian Culture. Angelini also published a poetry book, ” Manhattan poems,” dedicated to the heroes of 9/11, which won the Camaiore Prize in Italy (an Italian benchmark for contemporary poetry), was translated into English and published in the USA.

Stephan Morrow staged “Obama in Naples” by Claudio Angelini last season and was a theatrical collaborator of Norman Mailer. In 2007 he acted and directed Mr. Mailer’s play “The Deer Park” and was subsequently invited to co-direct a film of the play with Mr. Mailer and to act in it. He has directed five plays by Mario Fratti at Theater for the New City, including the currently running “Six Passionate Women.” Other notable productions include “Triangle – The Shirtwaist Triangle Factory Fire” by J. Gilhooley at 59E59 St. Theaters and “Dogmouth” by John Steppling at TNC. Morrow has directed staged readings of “Wall St. Fandango” by Murray Schisgal at The Actor’s Studio and Theater for the New City with casts including Peter Riegert and Rosie Perez. He has performed in two plays by Norman Mailer, “Strawhead: Marilyn, A Memory Play” and “The Deer Park.” He can be seen in Mailer’s cult classic film, “Tough Guys Don’t Dance.” From 2001 to 2005, as Artistic Director of The Great American Play Series, he directed four public presentations of Arthur Miller’s play “Incident at Vichy” with Mr. Miller’s personal backing. Casts included Richard Dreyfus, F. Murray Abraham, Fritz Weaver, Austin Pendleton, Barry Primus and many others. Morrow was mentored into the Playwright Directing Unit of the Actor’s Studio by Elia Kazan.

Brian Childers plays John, the novelist/candidate, and Marlain Angelides plays Rosa, his newly-Islamic wife who changes her name to Abeera. Kristin Taylor plays a beautiful young fashionista who beguiles the candidate and threatens his marriage. Toby Blackwell plays a political operative who hoodwinks John into running for Mayor. Four roles are yet to be cast as of this writing. Set design is by Mark Marcante and lighting design is by Alexander Bartenieff. Brian Childers (John, the novelist-candidate) played the leading role of Paolo, the journalist, in “Obama in Naples” by Claudio Angelini last season. He appeared Off-Broadway as Danny Kaye in “Danny and Sylvia, The Danny Kaye Musical” (Helen Hayes Award Winner for Best Actor in a Musical). He appeared in national tours of The Kid from Brooklyn (Danny Kaye – Original) and The Adventures of Tom Sawyer (Tom Sawyer). (www.brianchilders.net)